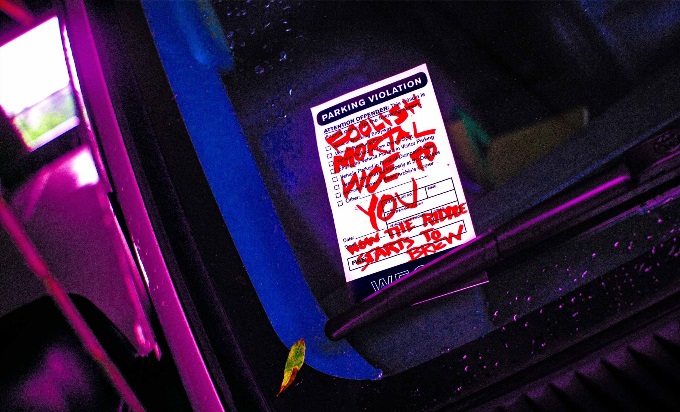 Summary: A man is forced to solve a heinous digital riddle before a terrifying parking demon destroys his vacation and his soul.

New Orleans is known as one of the most haunted cities in America. Tourists pay through the nose to go on ghost tours and hear the local horror stories. There is, however, one local story so full of dread that it is rarely told: the riddle of the New Orleans public parking app.

The story always begins the same way: An innocent tourist finally finds a parking spot in a busy area of the city. His reservation at a trendy restaurant is rapidly approaching. He needs to pay for his spot and make it in time. He spies a rickety sign nearby demanding that he download the city’s public parking app. Frazzled, he obeys.

The app loads slowly, every second doubling the tension in the air. As each moment passes, our tourist can imagine the hostess giving his table away. Finally the app opens, but our unsuspecting tourist’s relief is short-lived. On his phone is the most confusing riddle he has ever seen: a barely legible map showing hundreds of parking lots, their blood red markers overlapping, their numbers randomly assigned.

Our tourist summons all of his pluck and takes a deep breath. He looks at the cross streets near him. It’s hard to match them with the map – the streets on the screen are obscured by the legion of red, red markers.

He tries to narrow down his choices by location. The map zooms in and a huge list appears. All of the options are very close, and he’s not sure he trusts the app to know exactly where he is. He doesn’t have more time to waste, he has to go.

He closes his eyes, sends up a prayer, and clicks a random lot on the map: 303.

As he runs off toward his reservation, he holds his phone in front of him, waiting for the app to confirm his payment. Did it go through? Does he have to go back and try again? He hears the ding of digital confirmation at last as he reaches the restaurant, breathless.

He’s ten minutes late. The waitress informs him he’s lost his reservation and will have to stand by for the next available table. Thirty minutes go by, then forty-five. He gets a notification that his paid parking time is almost up. He adds more via his phone. “Maybe this app isn’t so bad after all,” he thinks to himself as he’s finally seated.

When he leaves the restaurant, he has time to kill before meeting some friends in the French Quarter. The sky looks like rain. He runs back to his car to get his umbrella. But as he approaches, he can see a piece of paper on his windshield. He sighs and trudges the rest of the way to his car. He snatches up the parking ticket, looking for the fine.

Foolish mortal, woe to you.
Now the riddle starts to brew.
Because this is not lot 303,
I curse you with this parking fee.
Unless you pay correctly now
To curse you even worse I vow.
- The Parking Demon

Shaken to his core, our tourist reopens the app with unsteady hands. This time, he walks up and down the two streets nearest to the lot, trying to locate them on the app’s map. None of the street names are the same.

He chooses another lot as it starts to pour.

He ducks into the nearest building. It’s a hotel. The staff eye him suspiciously as he sits, dripping wet, on their furniture. Large water drops fall from his hair onto his phone as he studies the map closely. Did he pick right this time? He taps his foot, anxiety building, waiting for the rain to stop so he can go double check. As soon as the sky clears up, he rushes back out into the street. The sun is shining and birds are chirping, but he doesn’t notice. He needs to put his mind at ease. He runs back to his car.

His dashboard is empty, but his relief quickly turns to terror when he notices the boot on his tire and with it, a new note:

You failed again, pathetic fool.
You still misused my parking tool.
The wrong lot you chose, and can’t dispute.
I’ve cursed you with this parking boot.
You have one more chance to make this right
Or else I’ll hex you with all my might.
- The Parking Demon

With tears of terror in his eyes, the man once more opens the parking app. This time he is ready for the disturbing map. He barely flinches when it appears on his screen. He is determined to do all he can to solve the riddle.

He walks around the entire block comparing street names. He looks around for another poor soul in the lot, but finds no one. In desperation, he ducks into a fortune teller’s shop and asks her to reveal the riddle’s answer. With a laugh, she tells him that her job is to tell the future, not to solve demonic riddles. He returns, dejected, to his vehicle.

He finally narrows the possible lots down to four or five, his best chances yet. He chooses one and he’s correct this time, he can feel it in every fiber of his being. There will be no more notes or visits from the otherworldly Parking Demon.

Satisfied with his choice, he quickly closes the app and rushes to meet his friends. When they yell at him for being late, he hardly responds. His plans are now but a mere gnat in the face of this fight between good and evil.

Amid his friends’ laughter, the tourist does his best to forget the hellish image of the parking map burned into his mind, but to no avail. He tries to remain confident about his parking decision but he can feel his conviction draining out of him. He's continually plagued with the distinct fear that something terrible still awaits him. Soon, it’s too much to bear. He tells his friends he’s just going to double check that he paid for the right parking spot and will be right back. He casually walks to the door of the restaurant, putting on a show of false nonchalance. As soon as he's out the door, he races to the parking lot on shaking legs.

Has he come back to the right spot? His car is nowhere to be seen. Disoriented, he scans the lot. Then he sees it: a final note taped to the asphalt.

How pitiful you humans are.
You can’t even pay to park your car.
I warned you once, I warned you twice,
Now I’m all done with being nice.
Your car is gone, don’t act dumbfounded.
You’ll pay for your error – it’s been impounded.
- The Parking Demon

Our tourist, completely defeated, wanders up and down streets until he stumbles into the impound lot. As soon as he steps foot inside the impound gate, it once again begins to pour. He’s grateful that the rain will conceal the tears streaming down his face. He pays his fines and, abandoning his friends, drives out of the city and as far as his tank of gas will get him. He deletes the parking app from his phone with vigor. He will never visit New Orleans again.

Take heed of this harrowing tale, and may it teach you a lesson: If your site or app is hard to use, many visitors will you lose.

Our team has been doing the real work of user experience since the earliest days of the commercial web. We’re out to make your digital products a whole lot better.

Riddles have their time and place, but never in your digital product. No one likes to feel like they’re dealing with a demonic Rumplestiltskin.