Welcome to the Intranet Dungeon 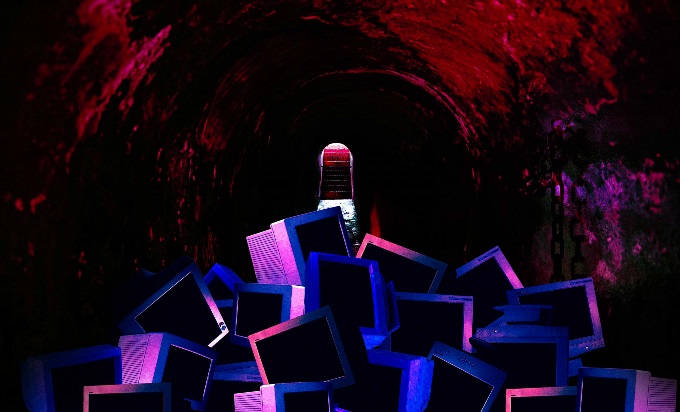 Summary: A bone-chilling tale of a dark digital dungeon and the brave souls who used the power of UX to escape its clutches.

Deep in the hospital basement, at the end of treacherous twists and maze-like turns, stood a decrepit computer. It hid in the darkest corner and struck terror into the heart of even the bravest soul who ventured its way. Hospital staff and administration alike shook with fear whenever they had to venture down into these dark quarters, not knowing when they might see the light of day again. The dark dungeon where the computer dwelled in was terrifying enough. But, living inside that computer, was an even deeper, even darker dungeon worse than any you’ve encountered in children’s books and horror stories.

The dungeon within the computer was a digital horror, and it inflicted more pain than any old bone cracking could ever achieve. It conducted its torture by serving up a hopelessly confusing intranet known as LexLoop.

There were no overlords in the LexLoop digital dungeon. Users and administrators alike were held prisoner. Administrators found themselves trapped in its depths for hours. They toiled to update and maintain it, but only succeeded in making its labyrinthine horror more impossible to navigate. Users waded through unending files and ancient content forgotten by everyone. No one could ever quite locate the things they were trying to find. Even when they did find something, they could only question if it was still useful or had gone out-of-date long, long ago.

Screams of lost souls could be heard all hours of the day and night. “How do I find contact information for Guest Services?” “Where is the equipment request form I have to fill out once a year?” “Let’s just print out the whole mayday instruction manual, it’s too hard to find on LexLoop, if it’s even there.”

Some tried to bring order and light, but their valiant efforts were abandoned as they too became trapped in the bowels of the dungeon without hope for escape.

Prisoners survived as best they could. They created their own dark corners of the dungeon, stashing their hoards of files for safekeeping. Others strong-armed their files onto LexLoop’s ever-growing, ever-more-complex home page. Still others found a small escape tunnel out of the main dungeon only to build their own smaller, separate digital dungeons that held all their internal communications, files, schedules, resources, links, and more. Always more.

Over time, these forlorn workarounds expanded the hellish dungeon. Nearly all efforts were abandoned. Owners wandered off, leaving their content behind to rot. The digital dungeon was soon littered with discarded files and snippets of information, reminding all that escape was ultimately futile.

Finally, tortured and abused long enough, the prisoners decided enough was enough. The time had come for administrators and users to revolt. There was only one way forward: Burn the LexLoop dungeon to the ground and create a new intranet castle in its place.

Alas, some poor souls had been driven to the brink of insanity and found it hard to abandon the very thing that had tortured them for years. Torture is inhuman, they said, but at least we know what kind of tortures to expect. They hunkered down in their corners full of outdated files and useless content, pitifully clinging to their chains.

Still, the revolt continued, led by the few battered bodies who knew there was, indeed, light at the end of the tunnel. After many months of effort, light broke through the old, crumbling dungeon walls. The prisoners stumbled out, blinking after so long in the dark and gloom. They tore down the walls of the old intranet dungeon and built a new intranet with bright, clear pathways and coherent organization. No longer did a trip to the intranet mean pain and suffering beyond comprehension. It now meant efficiency, convenience, speed, and pain-free usefulness.

All is well now. But they say the phantom of LexLoop still haunts the hospital. If you listen closely at night, you can still hear its whispers: “Forget about UX practices. You need your department’s accounting form on the home page. Create your own lists and workarounds. Don’t worry about keeping contact information up-to-date. Never tag your documents.”

Hospital administrators and intranet users are well-advised to ignore this sinister voice—it is only a temptation to create a new dungeon prison.

Dear reader, remember well the tale of the LexLoop and its user-prisoners. If you don’t, you might find yourself trapped in a digital dungeon of your own creation. Forever.